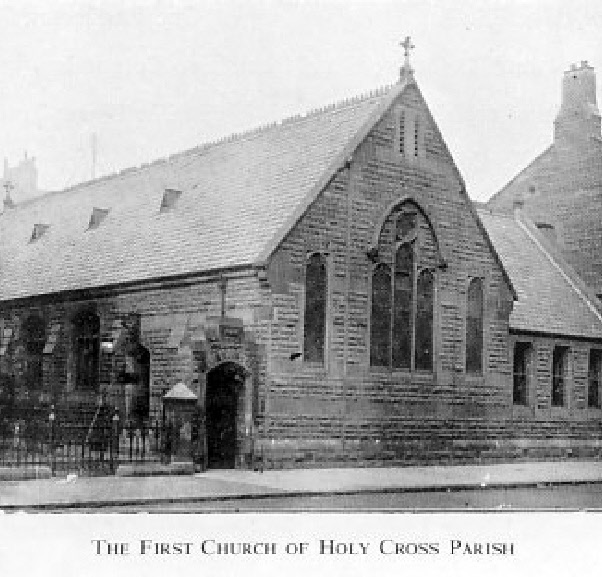 Holy Cross Parish
Going into Hospital as a patient?
Patient, Relative, Friend, Next of Kin.

Our suggestions for those who are going into Hospital.

Story of the Painting of the Church

The Sign of the Cross has been in my imagination and practice since I was an altar boy at St Michael’s, Parkhead, at the start of the War in 1939. The priest there, Father Power, thought I might make a priest and the Marist Order in Dumfries actually came for me when I was still in short trousers, but my mother put paid to the idea by telling the Marist Brother, “Sorry, It’s no’ the right job for him.” The good brother understood a mother’s intuition and left, pointing to the Cross above our lobby door, saying , “Don’t worry, Mrs Cairney, if God really wants him, I’ll be back “. l never saw the good man again, but the image of the Holy Cross has stayed with me constantly throughout the 76 years since. And, thank God, it remains with me to this day in the back pew at Holy Cross Church. Hence this painting.

Indeed, the Holy Cross has been with me all the way round the world while touring as an actor. But it all began much earlier. It was with me through the years of wartime evacuation at nine to several non-Catholic, aristocratic mansions in Dumfries and Aberfeldy and later National Service with the RAF in Germany when I was 19, although its image was slightly blurred by civilian conditions in that mostly Protestant environment. But I carried my particular cross in the rosary, which was always in my uniform back pocket. I somehow found the chapel among the many ruins which was that country’s particular cross to bear then, so there was always a Mass somewhere in that very minor Catholicity.

Similarly, when later I became an actor touring the world as the very Protestant Robert Burns, few saw me make the Sign of the Cross in the wings before I went on stage. And few heard, when I was in the Far East, what a Chinese Archbishop said to me during confession after I told him that it wasn’t always easy for me to receive communion while on a world tour:

“Don’t worry, just don’t sin. Keep the image of the Holy Cross in your heart and when you meet temptation, see it, and Our Lord in it, and you’ll be in safe hands.”
This canvas was created by me for the people of Holy Cross parish with this sincere intention in mind. May God Bless and Protect you all and I thank Monsignor Bradley, whose initiative made it all possible.

Awareness and Safety in our Catholic Communities

The National Office for the Protection of Children and Vulnerable Adults is an agency of the Bishops’ Conference of Scotland. It’s remit is to ensure good practice with regard to the protection of children and vulnerable adults. The Policy Statement agreed by the Bishops’ Conference reads: The Catholic Church in Scotland promotes the safety and well being of each individual and seeks to safeguard the welfare of people of all ages who are involved in whatever capacity with the Church and its organizations. As a Church community, we accept that it is the responsibility of all of us, ordained, professed, paid and voluntary members to work together to prevent the physical, sexual, emotional abuse or neglect of children, young people and vulnerable adults. The Notice Board carries this statement as well as the phone numbers for the Archdiocese and the Parish as well as the name of the Parish Co-ordinator, Bernadette Lavell. For their own safety and that of the children and adults they work with, all volunteers are expected to go through a process of providing references and a Scottish Criminal Records Disclosure. On-going training is also offered. Any organizations which involve children or vulnerable adults and use a parish hall are expected to give proof that they have appropriate procedures in place.

Awareness and Safety in the Parish of Holy Cross.

The Catholic Church’s safeguarding programme involves us all: the Parish Priest, the Parish Co-ordinator, volunteers, the parish community. Here in the Parish of Holy Cross we have a number of families with children of all ages and at all stages of their faith development. We are fortunate in having a number of Catechists who undertake the task of introducing the children to their faith and of preparing them for the Sacraments of Reconciliation, the Eucharist and Confirmation. We also have a number of volunteers who provide support to the children by presenting the Liturgy of the Mass of the day through a range of appropriate planned learning activities aimed specifically at meeting the needs of the age range of the children. As a parish, we warmly welcome and fully appreciate the contributions made by all those who volunteer, in whatever way and using whatever skills they may have, to enhance the spiritual and temporal life of our parish. In law, anyone who works with children or adults at risk is obliged to undertake a Disclosure check, and in our parish this process is carried out through the Archdiocese. The Bishops’ Conference of Scotland has a further requirement that anyone who offers their services as a volunteer with vulnerable groups must complete an application form, self-declaration form and provide two character references. They are provided with a role descriptor and go through an interview procedure with the Parish Clergy and/or the Parish Co-ordinator and, finally, all volunteers are obliged to attend presentation sessions to learn about ‘Awareness and Safety in our Catholic Communities’. This information is presented to reassure you that all possible steps are taken to ensure that the children, young people and adults at risk in our parish are as safe as they can be when they are in our care. To anyone thinking of volunteering their services in this parish community please let this information be an encouragement and not a deterrent. Copies of the ‘Awareness and Safety in our Catholic Communities’ Booklet are available in the Parish Library

Sacraments of Baptism and Marriage

Couples intending to marry should speak with Mgr Bradley at least six months before the date of their proposed Marriage.

The following schools are in our catchment area.

Holy Cross Primary School  is a very busy school with children from many different cultures.  We enjoy learning, working and playing together.

Holyrood Secondary School places the Catholic Faith at the heart of our culturally inclusive community.

St Bride’s is a very busy school with children from many different cultures.  We enjoy learning, working and playing together.